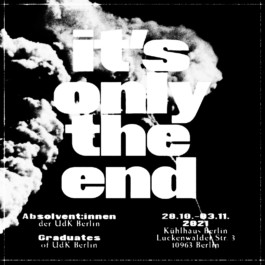 it's only the end

As long as time continues to flow in continuous motion, the end, as a notion of irrevocable conclusion, remains abstract. The end could be a pause, a farewell, or a departure from familiar territory – but to find closure by no means implies that one must fall into a permanent standstill. When that which has come before is viewed with melancholy, and that which is to come is already in sight, a moment of upheaval arises. While these times can be characterized by uncertainty, they too can be marked by euphoria, curiosity, and the potential of the unknown.

In this exhibition, 35 artists from the Universität der Künste graduating classes of Summer 2020 and Spring 2021 present their work for one week at Kühlhaus Berlin. Across four floors, these 35 individual voices show us not only their own personal viewpoints, but also their collective capabilities. Indeed, this exhibition project is borne from the initiative of the graduates themselves; it has been sustained by their solidarity with one another and their unshakeable will to create visibility for their work. As the doors to the university remain closed and final presentations in their usual settings remain impossible, this initiative has turned out to be a bitter necessity. These artists are thus not only united by their upcoming transition into an unknown future, but also by this particular time – one which has been marked by engagement and courage, despite all of the difficulties of the past months.

In this time of considerate abstinence, societal care and social distance, there are multitude of hurdles to overcome in order to take such a stand for the value of art. Space for independent projects in the urban realm has long been scarce; independent, noncommercial action is becoming ever more challenging. And as the safety net for all those who are willing to take risks has become more porous, unbroken solidarity among the people has emerged as a great strength and driving force.

it’s only the end stands as an emblem for the notion that time keeps going. The artworks in the exhibition address both that which is and that which may come. To whom does the city belong? And outer space? Who controls my body? How do I situate my own identity? What is happening all around me? Out of these pressing issues and unknown experiences of daily life, valuable potential for artistic positions that sharpen our understanding of the divided present is drawn. Societal and cultural phenomena are pursued, futuristic scenarios imagined, and the here and now are put to the test.

The diverse voices presented in the exhibition permeate the architecture of this former storage hall. Surrounded by columns and walls, steel and brick, the works engage with one another: painting with film, sculpture with drawing, and installation with performance. These intersections – subtle connections and fine fractures between subject matter, materiality, and media – form an open parcourse through the space that both allows for one’s own thoughts and is receptive to friction and contradiction.

And yet the end as a guiding motif remains tangible throughout the exhibition. For one fleeting moment, the long-awaited graduation becomes concrete and palpable. The preceding time at the university has significantly shaped the artistic identities and perspectives of the graduates – without claiming to be definitive. This exhibition thus shows that the end resides within a continuity. The end is in constant motion, it was always there, and it will continue to resound again and again.